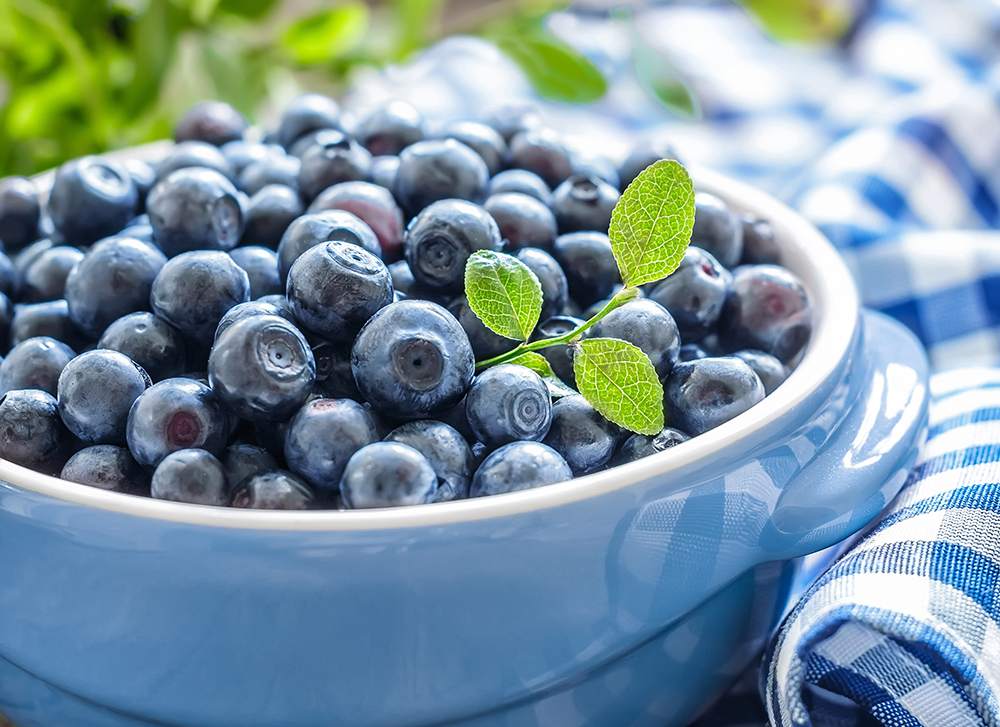 “You can definitely taste the difference in our berries,”

Nested on the sunny banks of Lake Chelan, in Manson, Washington, Blueberry Hills Farm is known for its exceptionally sweet and bountiful blueberries. The small family-owned farm is located on what was their original family homestead, settled back in the early 1900’s. Originally, the family planted their acreage with apples and continued to harvest them until 1999, when parents, Roger and Linda Sorensen had a radical idea. “The viability of blueberries had never been considered in the valley before,” explains fifth generation farmer “Blueberry Kari” Sorensen. That didn’t stop her Dad. Instead, he planted 13,000 blueberry plants and the gamble paid off. Just as the apples thrived in the high desert climate, the blueberries also thrived and produced berries with a higher sugar content and a highly concentrated blueberry flavor. “You can definitely taste the difference in our berries,” says Kari. “The proof? We use less than one-fourth cup of sugar in our homemade blueberry pies! You know the saying that the “proof is in the pudding”? Well, out here at Blueberry Hills, folks, we say the “proof is in the pie!”

Why Speed Scratch Products Can Mean a Better Profit Margin

Restaurant Week is always a hectic time, when your team is stretched in the front and back of house. A nationwide labor shortage and increases in minimum wage and employee benefits this year can add to the pressure, making saving time and labor in the kitchen even more critical to have a successful and profitable Restaurant Week and first quarter.

6 Questions to Ask Yourself When Planning Your Restaurant Week Menu

The Sackmann’s roots in Eastern Washington run deep, going back over a century. Owners Jeff and Jaime Sackmann both grew up on farming and ranching homesteads settled in the 1900’s. While ranching is in their blood, the Sackmann’s have continued to develop a contemporary, and successful breeding philosophy. Jaime holds a Masters Degree in Animal Science with an emphasis on ruminant nutrition and meat science.

With Washington’s minimum raise increasing in January and employee benefits expenses on the rise, restaurants are under more pressure than ever to manage their bottom line. “As restaurants are asking themselves how are they going to manage the increases in labor costs, we’re hearing from a lot of our customers that they don’t want to jack up menu prices,” explains Sysco Business Resource Consultant Ricky Webster. “But how do you do that?” Managing your food cost is a good place to start. Here are three tips from Ricky to keep your food cost in line, and drive profits up.

When you order Carlton Farms pork or beef, you’re ordering quality you can see and taste. What you’re also getting with each order is five decades of experience raising animals naturally and humanely– without hormones, animal proteins or growth accelerants.

Running a profitable restaurant has never been easy. And it’s not about to get any easier, as new wage and compensation laws kick in for Washington State. So how can your restaurant absorb higher labor costs?

We just made it through Thanksgiving. The Christmas season catering madness is about to start. But it is time to start thinking about your Inlander Restaurant Week menu. Here are three reasons to get started now, to make sure you have the most successful Restaurant Week possible.

While Washington State may better known for its apples than its dairy farms, its milk producers are certainly worth celebrating. Royal Dairy, nestled in the Columbia Basin in Grant County is leading the nation with its commitment to becoming a zero-waste dairy.

As you are putting the finishing touches on your Inlander Restaurant Week menu, make sure you pay as much attention to your written descriptions, as you do to developing the delicious dishes you’ll feature.

Research shows that a restaurant can increase sales by up to 30 percent just by utilizing enticing menu descriptions. Thirty percent! “Powerful descriptions are particularly important during a Restaurant Week promotion, because many diners are actively comparing your menu to other restaurants and selecting eateries solely based on menu offerings,”

Cashing in on Restaurant Week All Year Long

Research from Cake, a tech-solution division of Sysco, shows restaurants typically see a revenue boost of about 23 percent during an average Restaurant Week promotion. That can be a nice boost to your first quarter bottom line. Even better — how can you turn those first time customers into loyalists?

We asked Sysco Business Resource Consultant Ricky Webster for his tips for bringing those Inlander Restaurant Week customers back.